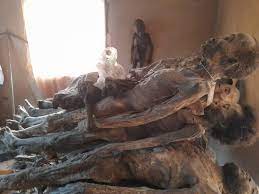 Osaro Nappiar, on Thursday, explained why he kept the remains of his mother at the uncompleted building in Ekenwan road Benin City, Edo State where 20 mummified corpses were discovered by the police Wednesday.

Edo State police spokesman, Mr Chidi Nwabuzor told journalists that Nappiar stumbled in just when operatives of the command arrived at the scene to condone off the building housing the mummified bodies.

According to Nwabuzor, Nappiar told the police when he was asked that he actually deposited his mother’s corpse in the mortuary run by one Mr Chukwuma Otu but left in search of money to give her befitting burial rites.

The spokesman explained that when questions were asked, the man explained that he took the corpse to somewhere on First East Circular Road, Benin City where Otu who is presently on the run was operating before he relocated to Asoro area of the Edo State capital.

Nwanbuzor said that Nappiar further told the police that his mother died at an undisclosed hospital somewhere at Uselu, Benin.

He added that when the mother passed away at the hospital in 2021, he took his corpse to Otu, who claimed to be a mortician for safe-keeping in order to raise money for the burial.

The police said that when he (Nappiar) was able to raise money, he came down to where the remains were kept only to discover that he (Otu) had changed base to Ekenwan Road, Asoro area, Uzebu quarters but was told to produce a card as evidence before the corpse could be handed over.

Nwanbuzor said: “He (Nappiar) said that he was unable to produce the card as he was not with it. They asked him to come on another day which was today. That was why he came down here to collect the corpse for burial.

“He produced the card which is now with the police.”

He said that some suspects have been arrested and that they are helping the police in their investigations.

One of the suspects arrested by the police at the scene, Gideon Friday, however, denied any involvement in the ritualistic act, saying he only came to check if his application for the position of a driver had been granted.

“I came to check if my application was granted because I applied for a driving job here. I was told that my contract has expired.

“When I got to the place to ask for the director, some community people came and beat me up.

“I told the assailants that I only just came to check if my request was granted.

“They (community people) didn’t listen. They continue beating me up. They later took me to the police station,” he sobbed.

Another suspect, Mr Chimaobi Okewan disclosed that Otu runs a mortuary and when he was given quit notice where he was before, he relocated to his permanent site.

“I was supervising a POP work. The corpses they found there were the ones they transferred from the place they were kept before to this place.

“The owner of the place is a mortician. He was told by his landlord to pack out.

“So he decided to relocate the corpses to his permanent site which is his own personal building,” he said.

Nwabuzor, however, insisted that such a building could not have been a mortuary but a shrine stained with the blood of different animals and also there is no signboard.